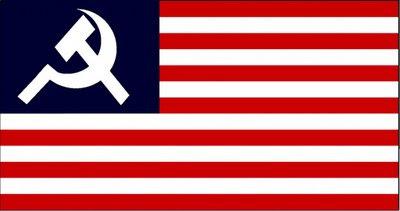 It must be said, that like the breaking of a great dam, the American decent into Marxism is happening with breath taking speed...

True, the situation has been well prepared on and off for the past century, especially the past twenty years. The initial testing grounds was conducted upon our Holy Russia and a bloody test it was...

Those lessons were taken and used to properly prepare the American populace for the surrender of their freedoms and souls... First, the population was dumbed down through a politicized and substandard education system based on pop culture... Americans know more about their favorite TV dramas then the drama in DC that directly affects their lives.

Then their faith in God was destroyed, until their churches, all tens of thousands of different "branches and denominations" were for the most part little more then Sunday circuses...

The final collapse has come with the election of Barack Obama. His speed in the past three months has been truly impressive. His spending and money printing has been a record setting, not just in America's short history but in the world. If this keeps up for more then another year...America at best will resemble the Wiemar Republic and at worst Zimbabwe.

These past two weeks have been the most breath taking of all. First came the announcement of a planned redesign of the American Byzantine tax system, by the very thieves who used it to bankroll their thefts, loses and swindles of hundreds of billions of dollars. These make our Russian oligarchs look little more then ordinary street thugs, in comparison. Yes, the Americans have beat our own thieves in the shear volumes. Should we congratulate them?