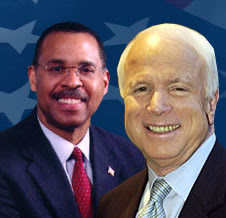 Hmmm. Tonight’s cocktail Party had Congressman Tom Price (good) and Senator John McCain (OK). McCain actually made a compelling case about the out-of-control spending and impending government take-over of the healthcare industry. Indeed, COAST would be interested in some of his statistics and positioning of the issue as it hit the nail on the head as to what is going on today. Then, he got questions about his vote for TARP I and Ron Paul’s Audit the Fed bill. He not only fumbled both, but was downright confrontational in his defense of TARP I (although he admitted he wished it had more regulatory controls on the money) and took completely unnecessary potshots at Ron Paul, who is a good friend of COAST, and clearly a hero of many others in the room. Glad McCain's not our president. Really glad. Would have been like Bob Taft in the White House (eeek!).

COAST also talked at length with Ken Blackwell. Cincinnati has no one better connected to the conservative movement in Washington – and well-respected in D.C. He was gracious and had loads of guidance for how we can build a state-wide organization in Ohio. Very compelling. Oh, and we met with lots of conservative activists throughout the nation. Not only powerhouses, but just average citizens who want to change the debate from big-spending democrats and big-spending republicans in their communities. The story repeats itself in community after community.

Then, we dined with old friends from Cincinnati at a crab shack. Stayed up late…Chris Finney needs to prepare for his speech in the AM. And the meat of the conference is Friday.
Posted by COAST at 6/11/2009 11:59:00 PM