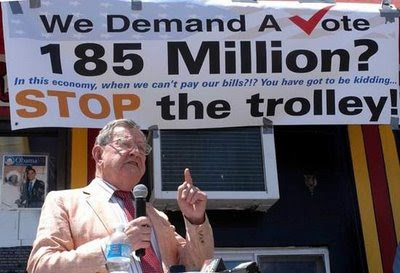 Honorary Chairman of the Trolley petition drive
former Congressman Tom Luken
The novel coalition among the NAACP, COAST, the Libertarians and Greens continues this year with a petition drive to force a public vote on City plans for a $185 million trolley system that runs a mere four miles in downtown and Over-the-Rhine, and perhaps up the hill to Clifton, if that's possible.

At a rally on March 21, NAACP President Christopher Smitherman announced the drive was more than half way to the goal of 6,150 signatures to place the issue on the November 3, 2009 ballot with more than 3,100 valid signatures in hand.

Thanks to all COAST volunteers, the NAACP and other coalition partners for making this campaign a success. This will be the fourth successful petition drive in three years for COAST and the WeDemandaVote.Com coalition.