COASTers urged to thank him 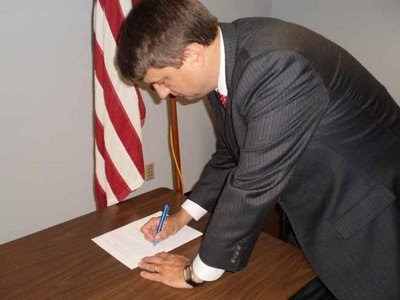 Council Member Chris Monzel consistently has been a voice and vote against higher taxes and wasteful spending while on Council. For the past five, years Monzel has sponsored the resolution to roll back property tax rates to assure that increasing valuations did not result in a windfall tax increase for the City.

With the City of Cincinnati facing a $40 million deficit in 2010, and an enormous hole in its pension system on top of that, and with City bureaucrats exacerbating the financial crisis by badly bungling tax income projections, COAST has predicted a 2010 push for higher earnings and property taxes. It has issued the Pledge to stop the drive for higher taxes.

"I am honored to sign this pledge today reaffirming my belief that the very last thing we should be doing during tough economic times is raise taxes," said Monzel. "Americans across the board are overtaxed. It's time government reforms itself and stops spending money on pet projects and starts focusing on providing core services in the most efficient manner."

COAST thanks Chris Monzel for his consistent leadership against higher taxes and spending, and for taking the Pledge this campaign season.

Please call Council Member Monzel's office at 513-352-3640 or e-mail him and thank him for his leadership.

The text of the pledge follows:

I, Chris Monzel, pledge to the taxpayers of the City of Cincinnati and all of the people of this City that I will oppose and vote against any and all efforts to increase taxes and create new fees during the 2010-2011 term of Cincinnati City Council. This includes without limitation, any increase in the City earnings tax or property tax, and the imposition of new fees such as a garbage collection fee.