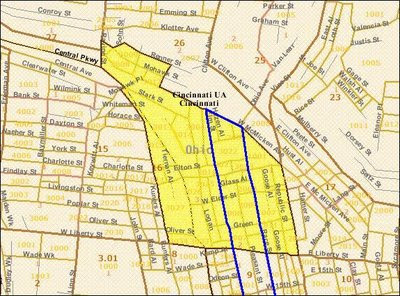 A study released Sunday shows that the northern region of the proposed streetcar route (blue line above) runs through "the most dangerous neighborhood" in America. Several local apologists have already bashed the study as being intellectually dishonest, outdated, "crap."

There's no indication the study group had any animosity toward OTR, or that their methods were somehow faulty. They simply sought to identify the worst crime pockets in the country by dividing the number of violent crimes by population for each sub-neighborhood in the nation. For crime data, they used stats routinely gathered by law enforcement; no indication of bias there. For population data, they used figures generated by the Census Bureau; no reason to suspect them of subversion either. The highlighted area above is Cincinnati's census tract #16, which when they did the math, happened to have the highest ratio of violent crimes per head count in the USA.

So what does that tell us? Nothing we didn't already know really. That particular area of Over the Rhine has had a crime problem for a long time. Sheriff Leis even went out of his way to send special patrols there to augment city forces two years ago. Those patrols were widely praised at the time for a significant reduction in crime. The study range, incidently, encompasses the patrol period, which leaves one wondering how much worse it was beforehand. But then again, it's hard to beat #1. Clearly we have a long way to go.

The larger question is the city's response. Faced with this enormous long term problem, our Mayor's answer is not to step-up prevention or enforcement, but to build a streetcar. Now that might be a reasonable answer to a pressing transportation problem. It might even slightly boost economic development efforts. But nobody's stupid enough to see a streetcar as a recommended remedy to such crime levels.

As we've been saying all along...focus on the basics first. Clean up the crime, fix up the buildings, and then if city officials want to dabble in luxuries like streetcars, they can ask the people who pay the bills if they want it. Until then, the streetcar remains a grossly irresponsible proposal.
Posted by COAST at 6/23/2009 09:37:00 AM