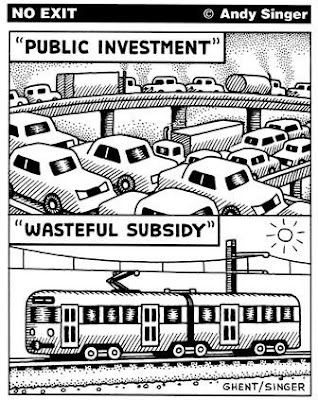 Streetcar proponents are often furious that highway projects don't generate the same public hostility that mass transit projects do. Highways are used by cars, buses, trucks, motorcycles, taxis, fire engines and campers. Routes and schedules are at the sole discretion of the traveller. Everybody uses and everybody pays, making our paved network the most universally democratic means of transportation ever invented.

Everybody pays for mass transit too, but it's used by only a small number of people going to a small number of places on somebody else's schedule. When asked to justify such a lopsided arrangement, "expert studies" are cited trying to convince people who can never use it that they should still pay for it.

So how will streetcar enthusiasts react to this recent study which shows that Brent Spence Bridge replacement delivers lower per-trip costs and two and a half times the return on investent as their beloved streetcar boondoggle?