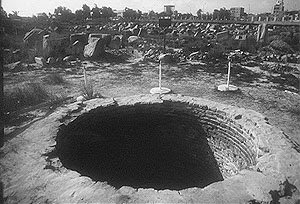 The bottomless pit of tax dollars known as
the National Underground Railroad Freedom Center
Finally freeing itself from the failed legacy of tax-and-spend Governor Bob Taft, the Ohio Senate has introduced an alternative to the budget from the liberal democrat House that strips all earmarks from the plan. The House Budget bill contained more than $8.6 million in earmarks, including a whopping $3.1 million for Cincinnati’s National Underground Railroad Freedom Center.
After the Ohio House passed its budget, the administration announced that Ohio was facing a $3 billion deficit for the coming biennial. Of course, that means a massive tax hike!

Leaders in the Ohio Senate have assured COAST that Freedom Center funding will not be negotiated back into the bill during budget conference.

COAST encourages its members to call their Senators to encourage them to stand strong against Freedom Center funding.

After four years of fighting against Freedom Center funding, victory appears close at hand.
Posted by COAST at 6/02/2009 07:02:00 AM