Mark your calendars!  Don't you dare miss the "see and be seen" event of the year as COAST celebrates Christmas and the end of 2016 with good friends, good food and good cheer! 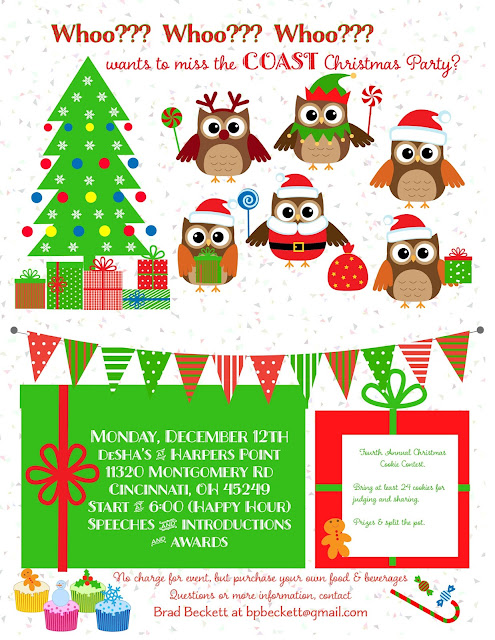 
VOTE NO ON ISSUE 14 – NOV 8
COAST – Stands for limiting the rate of taxes and spending and stopping the abuse of power by Government officials
COAST Response to Kings:
Superintendent claims of outside group spreading misleading information - - NOT TRUE!
Kings community members are with COAST, so this effort is not being driven by an outside group

1)     TRUE – COAST was correct this levy will be a continuing levy, as are all of Kings current levies, which will increase taxes $217 per $100,000 of home value.
2)     TRUE – COAST was correct according to KINGS own documents, KINGS total revenues grew from $34.2M (2010) to $41.5M (2016).
COAST defines flat funding as a 0% increase.  Yet with the state funding and TPP (tangible personal property tax) reimbursement KINGS funding increased by 1%, not flat and they don’t talk about the reimbursement for the TPP, they only claim they lost money!
3)     TRUE – COAST was correct.  The 2016 cash balance by fund report dated 6/29/2016 shows a cash balance of $13.5M.  KINGS finance Summary Report and Kings Current Bank Reconciliation for month ending Sept 16, 2016 shows a beginning general fund balance of $9.4M with current available balance of $14.2 M with a grand total of all funds of $21.6M
The unreserved cash balances on June 30 listed are just projections beyond 2016.  KING’S                  practice has been to paint the worst case scenario because of conservative revenue projections in the October 2016 forecast, current cash reserves won’t be depleted until 2019.  Why does Kings need a levy now?
4)     TRUE – COAST was correct according to the Ohio Department of Education current 2015 district profile Report, KINGS has more Administration expenditure per pupil than similar districts.  KINGS recent actions don’t paint a picture of “Tightening the Belt”.  KINGS recently made the Public Relations person full time and replaced the business manager, these positions have full administration benefits and salaries which includes 100% of their retirement paid by the taxpayers, which equals 24% of their salary and 95% of their healthcare costs.
5)     TRUE – KINGS voted against adopting the Ohio Checkbook without ever seeing a demonstration of the Nations #1 ranked transparency program and again denied a demonstration after a formal request from the Treasurer’s office.  WHY?  The OHIO checkbook program has set new transparency standards, which provide interactive tools to search and compare spending data and empowers taxpayers to follow the money.  It’s a key to open government so KINGS claims of transparency don’t ring true.  Board docs, while a good tool, it’s just a program to post documents.  Why does KINGS refuse this transparency?  The Ohio School Board Association, the Ohio Association of School Business officials, and the Buckeye Association of School Administrators have all endorsed the Ohio Checkbook.com.

6)     TRUE – COAST questions, the concern for the abuse of special needs students,  with district’s claims, this horrible ordeal only cost taxpayers $5,000.  What about the $80,000 payout and glowing recommendation for the teacher involved??   What about the legal costs for the 9 depositions, and most importantly, where’s the district’s compassion and remorse for what happened to our most vulnerable children, those without a voice, who endured this treatment.  We still don’t know who knew what and when.
7)     TRUE and SAD, again no concern or remorse for allowing an environment, where the former Board President stated, that he was threatened, intimidated and subject to harassing criticism.  How sad, he had to ask for the school resource officer to attend meetings.

10)  TO THE KINGS BOARD – What have you done to tighten your belt?  When most districts understand, given the current economy, not having funding cuts is the most they can hope for, and work hard not only to control spending but wait as long as they can before raising taxes on families and Senior citizens.  NOT KINGS!  They went to levy with almost $8 Million in their checkbook in 2010 and here they go again!!!  Only worried about the districts checkbook and forgetting about taxpayers, who are struggling!  The district has continued to hire at the top while threatening to cut Teachers and Programs for students, while you are sitting on a cash surplus of +$9 Million. This is wrong!!!


Click here to see top 10 reasons to Vote No 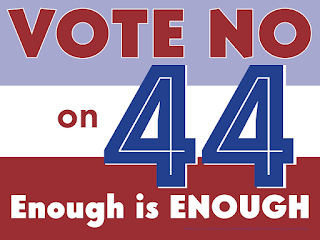 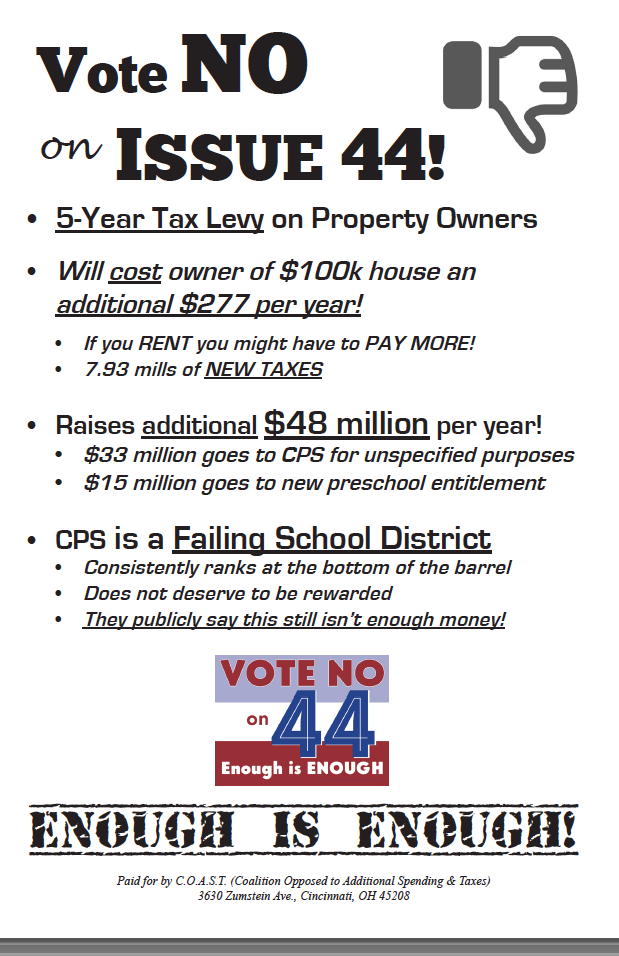 COAST Endorsements for the 2016 Election

The following individuals and issues have been endorsed by COAST in next month's election.


COAST urges you to remember these fine patriots & issue positions when you cast your ballot on November 8th!

Top 10 Reasons to VOTE NO on the Kings School Levy

Before you cast your vote on the Kings School Levy, please note the TOP TEN REASONS you should VOTE NO!   (click below to enlarge) 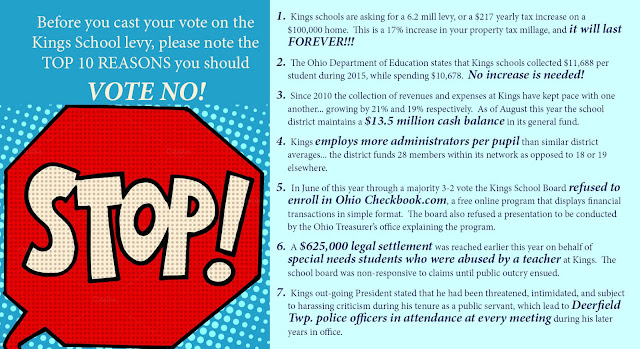 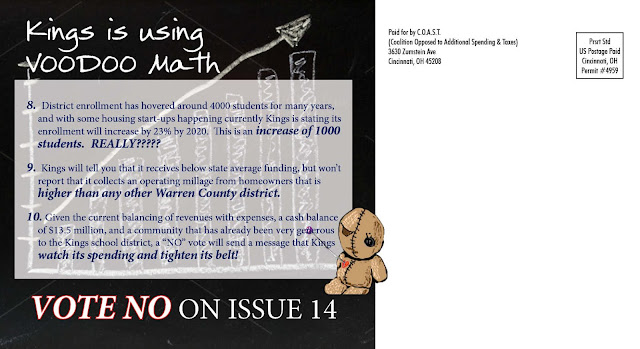 As expected, Cincinnati's City Council voted this week to use general fund revenues to pay for operation of the Streetcar Named Deception.

Smitherman has been a fearless truth teller on the Streetcar and all matters fiscal throughout his tenure on Council.

Please join COAST for the Ohio House District 62 Candidate Forum.  Incumbent Ron Maag is term limited in this Warren County seat.  Candidates Scott Lipps, Steve Muterspaw, and Ray Warrick will have the opportunity to convince you why they deserve your support.  We look forward to seeing everyone! 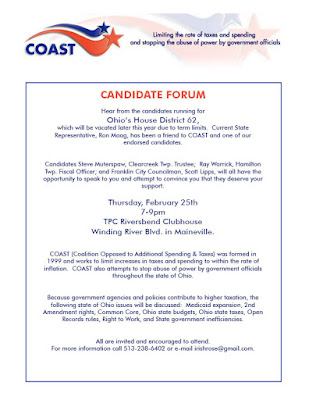 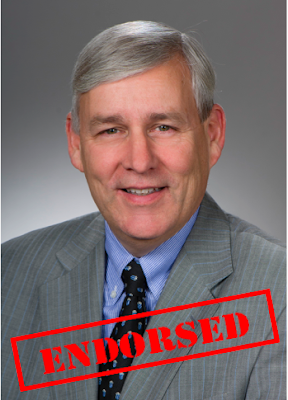 In the Republican Primary for Ohio House District 27, the choice is clear: Tom Brinkman has served his constituents and his conservative principles well and is deserving of re-election.

Brinkman has been a champion for the taxpayers and has worked tirelessly to reduce the size and cost of government, and increase transparency.

Whether it is in the halls of the Capitol building, or in meeting rooms in the district that includes Anderson Township, Newtown, Fairfax, Indian Hill, Symmes Township, Hyde Park, Mt. Lookout, and Mt. Washington, Tom has been a tireless advocate for the causes near and dear to COAST's heart.

COAST endorses Tom Brinkman for re-election to the Ohio House of Representatives.

Learn more about Tom or make a donation to his campaign at http://gobrinkman.com