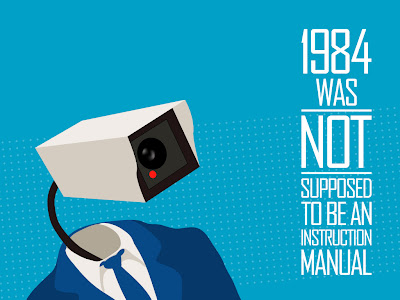 "Take it slow and careful", you tell yourself, "it's slippery out." But some bonehead is right on your tail. The light's been green for a while. Now it's yellow. No way to stop without the bonehead eating your bumper. No cross traffic...better just to slip smoothly through the intersection.
You weren't entirely through when it turned red. No cop would ticket you for that, especially if he saw the whole thing. But big brother's no cop. Cops have common sense, and obviously you made the safer choice. Big brother's a computer and he's programmed for cash flow, not common sense, so a ticket arrives in the mail with a picture showing your car in the intersection underneath the red light.
The city calls them red light cameras, but they're really "gotcha cams". If you make a right turn on red and don't come to a full and complete stop beforehand, "gotcha". If you're a few miles over the posted speed limit, "gotcha". City officials don't talk about these particular features with the public, but all this and more has been included in the red light camera contract.
The "gotcha" game doesn't end there. EZ-Pass is used in the eastern US to automatically bill people for road and bridge tolls. Divorce lawyers now routinely subpoena EZ-Pass records to prove marital infidelity. Optical character recognition (OCR) allows big brother to convert the dots from a camera into recognizable numbers and letters. Big brother "reads" just as easily as if it were typed in on a computer keyboard. The technology hasn't worked so well with paperwork due to the large variety of artistic fonts people use. But state-issued license plates only come in one font which is already optimized for OCR.
Cincinnati's cameras can read every single license plate that passes through an intersection, store full motion video of it forever, and all of it will be public record. Pretty soon our divorce attorneys will play the "gotcha" game too. "Is that your spouse in the front seat with you...well then, who is it?"
The problem with big brother is that it pits government against the public in a "gotcha" game. Real safety comes from cooperation between law enforcement and the public. It wasn't that long ago that parts of our city rioted in the streets because they felt law enforcement wasn't there to protect them, but to prey upon them. Our community has come a long way toward healing those wounds. But now red light cameras threaten to undo all that and return us to those dark tumultuous days.
Posted by Mark Miller at 6/14/2008 12:13:00 PM 5 comments:

In a continuation of the policies of the disgraced Taft administration, the Republican-controlled house and senate have approved $875,000 of additional funding for the National Underground Railroad Freedom Center. Speaker Husted even refused to recognize Representative Brinkman to allow him to introduce an amendment to the bill for a vote before the House.

COAST had launched an extensive lobbying effort to educate and persuade legislators against voting for further taxpayer support for this failed and wasteful institution, including more than 500 postcards sent to each of Governor Strickland and Speaker Husted. During his eight years as Governor, Bob Taft consistently supported funding for the Freedom Center. Now, Speaker Husted, Governor Strickland and Senate President Harris have continued riding the Freedom Center’s train toward excessive spending.

COAST has documented here the excessive salaries for its executives and here how John Pepper and Freedom Center executives have greased the palms of powerful statehouse officials to gain favor for their funding.

Representative Brinkman followed through on his promise to offer an amendment to strip the funding, however Republican Speaker John Husted refused to recognize him to allow the amendment to be presented.

“Speaker Husted appears to have graduated from the Bob Taft school of governance,” said COAST Chairman Jason Gloyd. “He not only ignored the will of millions of Republicans throughout Ohio to cut off this funding, he prevented his own Republican legislators from having a say on the issue. When Republicans are slaughtered in November, Speaker Husted and other Taft-like Republicans will have no one but themselves to blame.”

Freedom Center executives have said they intend to seek $3 million in taxpayer funding every year in perpetuity.

David Pepper and Todd Portune voted Wednesday to explore imposing new fees on the public when transacting credit card transactions with the County. The fees will range between $2.95 and $50 per transaction. Read here about the how these liberal democrats now see the public as prey to pluck out their eyes, rather than customers to be respected. Listen to a funny dialogue between Pat DeWine and Todd Portune on the topic here.

"Almost every business accepts credit cards and checks without an additional penalty because they want customers to enjoy the convenience those transactions offer," said COAST Chairman Jason Gloyd. "Our out-of-touch, tax-and-spend politicians simply see these transactions as another chance to harass an already over-burdened public."

After the defeat of the Super Sized Jail tax in 2007, Pepper and Portune have repeatedly attempted to close the County budget gap with increased revenues, rather than cutting bloated County spending.

“It’s the spending, stupid,” said Gloyd. “These types of indignities piled upon the taxpayers are what Republicans get for failing to run an endorsed candidate against Portune.”

Four years ago, Commission Phil Heimlich and COAST leader Christopher P. Finney exposed the profligate waste at Drake Center, raging out of control at $1 million per month in unnecessary taxpayer losses. Fortunately, they negotiated the sale of the property to the Health Alliance. A crucial part of that agreement with the County was that the Health Alliance would not seek renewal of the five-year levy when it expired in 2009.

Amazingly, over the past few months, Todd Portune and members of the County administration at his urging, pushed the Health Alliance and Drake to ask for a renewal or expansion of the levy anyway – at a cost to the taxpayers of between $12 and $20 million per year.

On May 29, the Health Alliance and Drake politely declined Mr. Portune’s generous offer of even more of your tax dollars with this letter.

“The taxpayers of Hamilton County owe a debt of gratitude to the Health Alliance for sticking to its promise upon the sale of Drake,” said COAST Chairman Jason Gloyd. “Unlike the National Underground Freedom Center, which has repeatedly broken promises when it comes to tax cash, the Health Alliance has started a new trend away from unbridled greed when it comes to tax dollars.”

COAST condemns Todd Portune for this shameless attempt to re-instate a tax that has already been eliminated. The Health Alliance has now clearly indicated that the tax money is not needed to run Drake, which was COAST's position all along. The sale of Drake to the Health Alliance has saved the taxpayers more than $12 million per year. “That Commissioner Portune would want to un-do this is nothing short astounding and treacherous,” said Gloyd.
Posted by COAST at 6/02/2008 03:22:00 PM No comments: