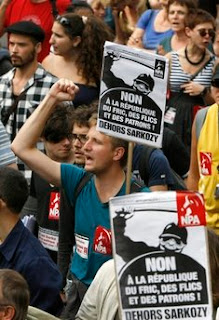 Millions of people across the pond received a lesson in the American value of Emersonian self-reliance today as government rail left them stranded. Commuters in Paris packed into cars during the reduced service, and London buses were overflowing. City sidewalks were full of walkers and thousands of bikers took to the streets in both capitals.

Strikes hobbled public transit across France and in London on Tuesday, forcing tourists and commuters to alter their plans as they bore the brunt of a wave of discontent over government cost-cutting measures — a wave expected to soon prompt walkouts elsewhere on the continent.
French unions staged a nationwide walkout over plans to raise the retirement age from 60 to 62, cutting service on trains, planes, buses and subways. London Underground workers unhappy about job cuts closed much of the city's subway system — the first in a series of 24-hour strikes planned for the fall.

The French strike coincides with the start of debate in parliament over a plan to overhaul the money-losing pension system so it will break even in 2018. The government insists the reform is essential as people are living longer, and it has urged everyone to show "courage" as it tries to chip away at the huge national debt.

Meanwhile the Obama administration yesterday announced their intention to throw another $50 billion down the porkulus rat hole, including 4,000 more miles of rail transit, road repairs, and more trolleys. Just what we need, more dependence on an increasingly bankrupt federal government, and less self reliance.

It's not working for the Europeans, and it won't work for us either. The United States acheived her greatness through individuals taking responsibility for their own transportation. We won't regain our honor by shirking that responsibility onto the public.
Posted by COAST at 9/07/2010 11:58:00 AM 21 comments:

More Homage to Our Favorite Word...

Residents of Lake Oswego, a wealthy suburb of Portland (genuflect when you say that), have organized a non-profit group to oppose a proposed streetcar extension to their neighborhood. Calling it a "flawed project" that they "don't need" and "can't afford," the group hired high-powered lawyers and lobbyists to fight Portland's (bow when you say that) transit agency. One of the organizers is the wife of disgraced former RINO senator Bob Packwood.


"It just doesn’t make sense to buy a $360 million transit project that puts Lake Oswego taxpayers at risk.  Not when our schools and other priorities are suffering from continuous budget cuts. Because of budget constraints, we are cutting real services that we need right now.  Schools all around us are cutting days because they are running out of funding.

Our town has other priorities:
We can’t allow our schools and community to suffer further to buy a $360 million dollar transit project we don’t need."