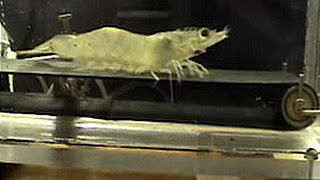 (your tax dollars at work)

A scathing report from Senator Tom Coburn has identified $3 billion of mismanagement at the National Science Foundation. The report finds that the foundation has squandered billions on questionable studies, poor cost controls, duplicative research, and many other forms of mismanagement.

Some of the scientifically urgent projects include:

- $560,000 to have shrimp run on a treadmill to test their endurance. I know it's very important to me how my dinner performed on a treadmill during its living years.

- $1.5 million to create a robot that can fold laundry. This robot was able to fold one towel in 25 minutes. Come on, even I can fold 2 or 3 towels in the same time.

- $315,000 to study whether Farmville helps adults develop and maintain relationships.

- $2 million to determine that the same people who post photos at the same place at the same time are probably socially connected. Since I don't have a science degree I couldn't have guessed that.

This is only a fraction of the waste and mismanagement at this single agency. You would think that a government facing a $1.5 trillion deficit might take steps to spend its money wisely.
Posted by Forward Conservative at 5/26/2011 10:48:00 PM 11 comments: 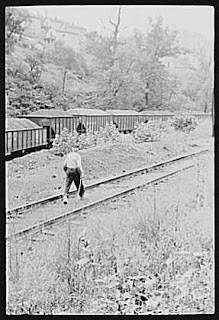 (man with cane outpacing the streetcar)

An Enquirer investigative report has revealed that the $100 million streetcar project will barely travel faster than a brisk walk. The reporter was able to walk the projected streetcar route in 34 1/2 minutes, not far behind the 28 minutes the streetcar is expected to take. When you factor in waiting time, a fast walk can get you to your destination in roughly the same amount of time as the mighty $100 million streetcar.

Naturally this revelation has caused much consternation in the downtown urbanist community, who as always are crying "bias" at this article, as they do every time an article doesn't completely shill for the streetcar. In response the Enquirer asked its readers to walk the route themselves and post their time. As of the time of this writing, a grand total of one person reported their time. Yet dozens of YP urbanists wrote in to complain about virtually everything. This leads me to wonder, are YP urbanists too lazy to take a 3 mile walk, or are they so out-of-shape they won't even try?

The streetcar's inefficiency is just one of many questions about this project. What is the purpose of spending $100 million on a transportation project for a 3 mile loop that is barely faster than walking? A bus can serve the same purpose at a mere fraction of the cost. And walking, last I checked, is free.
Posted by Forward Conservative at 5/25/2011 12:48:00 AM 5 comments:

COAST is pleased to host its 2011 Annual Fundraising event featuring: 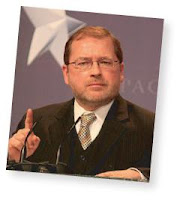 Grover Norquist
President,
Americans for Tax Reform
The event will be held:
Thursday, June 9
6:30 pm
Anderson Center  (View Map)
7850 Five Mile Road
Anderson Township, OH 45230
Sign up by clicking one or more of the buttons below: