You know the game is almost over, when they cast about for whom to blame 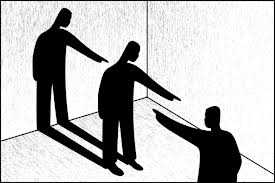 As we said previously, COAST is more than happy to take the credit for killing the Streetcar project, but what the media puts out there to supplant real analysis -- and to blame COAST for the errors of the City -- is downright funny.


In anticipation of Roxanne Qualls' April 29 Streetcar hearings, German Lopez of City Beat parrots the line emanating from City Hall that somehow the two ballot issues advanced by COAST slowed or obstructed the legal or practical progress of the Streetcar.

In 2009 and 2011, that opposition culminated in two failed referendum efforts. But as the city manager’s most recent memo says, these referendum efforts only made the project more expensive by forcing costly delays.

So, the entire extent of Lopez' probing analysis into this proposition is that "the City Manager says it is so."  As is de rigueur for City Beat, they made no attempt to contact COAST to get their point of view (is that what they teach you in J-School, Mr. Lopez?) or question the official line from City Hall.  That's Pulitzer Prize material for sure.

In fact, as COAST explains here, this notion is quite simply -- untrue.  The City legally and practically could have proceeded with the Streetcar planning and implementation through the ballot initiatives.  There was not a single reason they could not have done so.  Indeed, at the time, the administration said everything was "full steam ahead."  It is only now that their precious project is crumbling that they blame ballot issues two and four years ago for their own failings.  Until now, there was not a suggestion that the ballot issues delayed anything.


We would challenge the lazy news media, the next time Meg Olberding (City Hall P.R. flack) suggests this, to ask (i) what things specifically did you delay at the time of these two ballot initiatives, (ii) if you did delay those things, why did you do so?  Was that your own decision or was there some legal impediment to proceeding?, and (iii) if it was such a problem -- the ballot issues obstructing things, why was there never a mention of this until 2013?

Now on to the thing COAST can take credit for, or at least would like to.  After Governor Kasich took office, we asked him and the Ohio Department of transportation to re-visit the rail-fanatic decision of Ted Strickland to fund the Streetcar to the tune of $52 million.  You will remember that this was the money that was going to assure that the Streetcar climbed Vine Street Hill to "connect the two major employment centers" in Cincinnati.  Now, Lopez tells us that that $52 million could have easily plugged the $17.4 million funding gap the City is experiencing.

How do you think the streetcar would be doing today if it had an extra $52 million? Would a $17.4 million budget gap be an issue?

If Lopez had done any critical thinking at all, he would have realized that the funding gap for the larger and longer streetcar project would have been even greater, not less as he posits.  The $52 million can't be used both to climb the hill to Corryville and to close the funding gap.  Which is it, Ms. Qualls and Mr. Lopez?

Then, Lopez gets into funny-business territory.  COAST and its allies have been so effective and persistent in opposing the Streetcar project, he claims, that they scared off potential bidders for $70 million in contracting work in a weak economy.  Really?  Even the City Manager admitted his own budget was low (you would think a good reporter would ask him why he would make a budget intentionally low).  Perhaps the City can't properly bid out a project?  Perhaps the fact that the State Legislature, the Governor, three County Commissioners, two local Congressmen and others universally oppose the project had something to do with the failure in the bidding process.  Perhaps the City's inherent financial instability (the bond rating is about to be lowered, and they have a $750 million hole in their pension fund) has more to do with the failures, than a local taxpayer accountability organization.

In any event, it is clear that the powers that be at City Hall are furiously casting about for someone to blame at this stage, more than trying to fix the problems that they themselves have created.  And when it comes clear that they have squandered $50 million on this soon-to-be abandoned project, they want someone holding the bag other than themselves in an election year.

So, COASTers take a big bow.  Victory is within reach.  And prepare for the media, the politicians, and the rail fanatics to point the finger squarely at us for wasting these untold millions needlessly.  It's not true, but why let that get in the way of a good story?