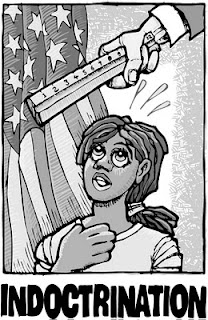 We were delighted Friday to welcome the Cincinnati Enquirer aboard our campaign to challenge the outrageous conduct of the Cincinnati Public Schools and its Hughes High School civics teacher Dennis McFadden.
We encourage you to read the Enquirer editorial on the topic here.  In that most excellent opinion piece, the Enquirer decried the conduct of CPS, calling it an "outrage."
What CPS did is an absolute outrage and a violation of the trust the public places in the district to educate children, not indoctrinate them.
The Enquirer went on to say:
What then happened is inexcusable - and, as the candidate who blew the whistle on it said, "Orwellian."
The Enquirer even rejected the ultra-lame excuses of CPS that this was an isolated incident and one that they had no idea would happen with the activists they chose to escort the children to the polls:
This truly stretches credulity. It's hardly a secret that CPS is about as close to a one-party operation as you can get, with union domination and an all-Democrat school board.
COAST and its founder Tom Brinkman have been featured on WLWT, WXIX, WKRC, the Daily Caller, Rush Limbaugh, Sean Hannity, the Savage Nation, Fox News. www.DrudgeReport.Com,  www.Lucianne.Com, and National Review on this topic.  On Saturday, COAST attorney Chris Finney appeared live on the Fox News Channel to discuss the scandal.
The lawsuit will be pursued to its conclusion to expose the schools depth of collusion with democrat party activists and to force the schools to stop this conduct once and for all.