Traffic camera ban may be on November ballot in Garfield Heights 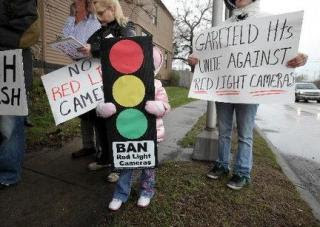 GARFIELD HEIGHTS, Ohio -- Residents tired of giving more of their money to the city have taken matters into their own hands.

Residents turned in petitions Monday to the city's clerk of council to get two charter amendments on the November ballot. They want voters to throw out traffic cameras and garbage collection fees.

The group sees both issues as an attack on their civil liberties, as well as their pocketbooks.

"It's a money grab on the back of the tax payers," said Frank Wagner, a member of Citizens for a Greater Garfield and a former city council president.

More than 2,500 residents signed the traffic camera petition, and more than 2,000 signed the garbage fee petition. Only 875 signatures are necessary to put issues on the ballot. Groups routinely collect more signatures than required in case some are disqualified. The petitions must pass a legal review by the city before the issue is put on the ballot in November.

The garbage fee $15 for single-family homes with a discount for elderly residents, said Councilman Joseph Suster. Wagner said residents already pay for trash pickup through their property and municipal taxes. But the real hot-button issue is the traffic camera program, which was introduced in 2009 as part of a financial recovery plan initiated by former mayor Tom Longo. About 4,800 motorists were ticketed in June, the first month the city issued tickets from the cameras. The tickets are $100 and could bring in up to $312,000 in fines for the June infractions alone.

Wagner calls the cameras speed traps that take away from the average working person on a fixed income.

Mayor Vic Collova told the Plain Dealer previously that safety is a major factor of the new traffic cameras.

"My biggest thing about it is they say they want a police officer on the scene, they don't want a camera taking a picture of them," he said. "If someone's robbing a bank and the security camera takes a picture, do they think he shouldn't be arrested? I don't understand the difference."

The police department is more than enough to ensure residents drive safely, Wagner said. He said the fine and two points on the license are enough to dissuade speeders. No points are given for a camera ticket since it is a civil infraction, police Capt. Robert Sackett said.
Posted by COAST at 7/19/2010 09:53:00 PM